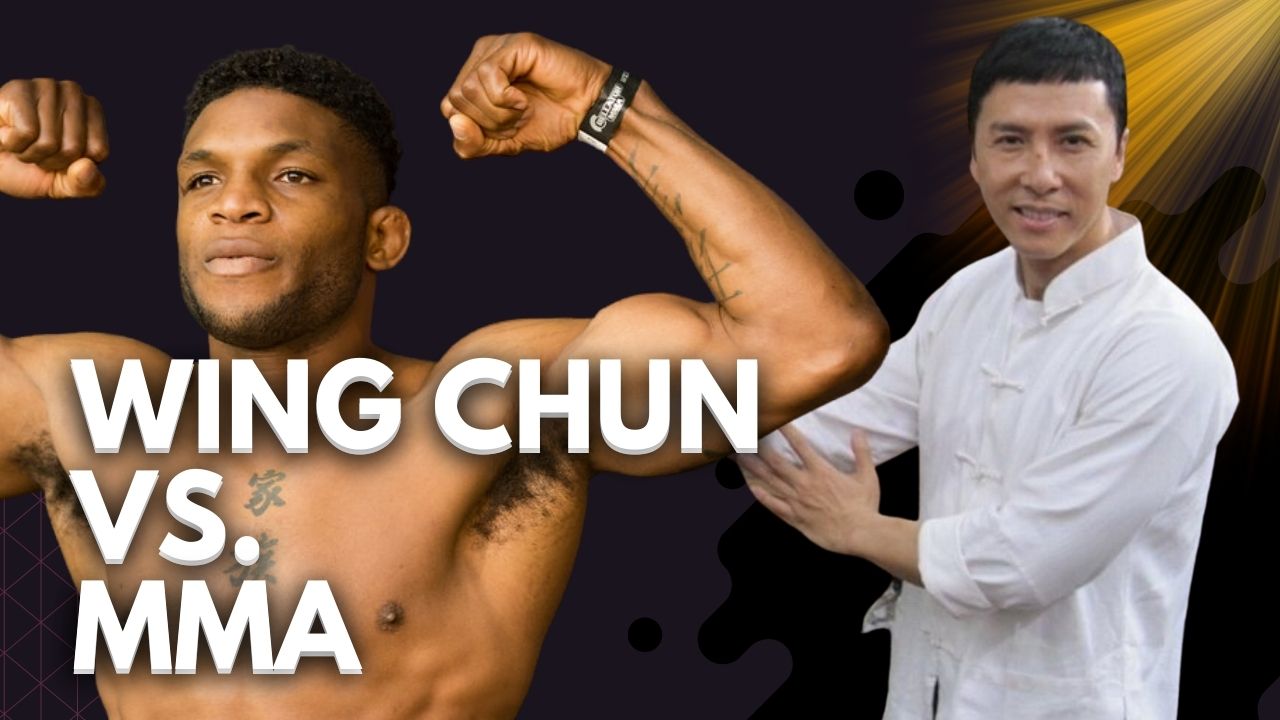 Wing Chun and MMA have a very tense relationship. To be frank, the topic of Wing Chun vs. MMA can be a very toxic one— it is another example of East vs. West mindsets, full of “I’m right!” “No, I’m right!” In this article, we are going to go over Wing Chun vs. MMA in a real fight, and in a controlled environment (UFC for example.)

Wing Chun vs. MMA in a Street Fight

When it comes to a street fight, it is important to remember that there are no rules. If you are forced into a situation on the street where you have to defend yourself, you cannot rely on somebody coming into the fray to break up a fight. Wing Chun is designed for self-defense—it is designed to end a fight. A good Wing Chun practitioner will be merciless in getting a fight done. MMA on the other hand, is designed for sport and sport is designed to be prolonged—remember that sport is part of entertainment. A street fight may have an audience, but in these times of social media and smartphones, people are more likely to pull out their phone to record than they will help you. Something that MMA will drill into practitioners, is that a fight will always end up on the ground. Wing Chun practitioners seek to finish a fight before it can get to that point—Wing Chun practitioners will use what could often be considered “dirty fighting.” Attacks to the groin, eye gouging, the neck, broken bones—things that a referee would disqualify an MMA practitioner in the ring. Wing Chun beats MMA in a street fight.

Wing Chun or MMA – Which is better?

There is really no objectively correct answer to this sort of question. Both have their benefits, and both have their weaknesses. It all boils down to what the potential student wants. Wing Chun is meant for self-defense. People train Wing Chun to learn how to defend themselves, if, heavens forbid, they actually have to defend themselves. Wing Chun is not a martial art meant for sport, and in fact, MMA beats Wing Chun in the ring for that exact reason: rules of the ring. More on that below.

MMA is a martial art people take up for sport, more often than not. If anything, MMA will give a practitioner endurance and size over an opponent. MMA fighters are trained to endure long fights—and more often than not, being unable to last long in the ring is liable to get a person made fun of. MMA is a great workout, and comparatively speaking, it will, more often than not, help the practitioner learn how to take hits, whereas in Wing Chun, there just are not as many schools with full-contact sparring.

When it comes to Wing Chun, some schools will offer a more traditional Wing Chun learning experience, while others will offer something more progressive. Lineages can make choosing a school overwhelming, and then of course, there is the matter of “Will this be the right lineage to take? Is this school actually a school, or is it another martial arts school in it for profit only?” MMA beats Wing Chun in this regard as well because choosing an MMA school is much more cut and dry than choosing Wing Chun schools.

Why Wing Chun loses to MMA

Rules. Wing Chun loses to MMA in the octagon because of MMA rules set in place to protect the MMA fighters from doing long-term damage to each other. Wing Chun is not a martial art for sport. Wing Chun can turn a practitioner into a legit  animal. Unleashing that onto someone doesn’t end well. That’s why Wing Chun practitioners don’t want to fight. They want to leave. They know full well how much permanent damage they can do to someone. And when given the choice, why would they hurt someone? However, if given no other choice, if they have to fight, they will, and they will go for all parts of the body that would be considered illegal in a UFC fight. So when it comes to Wing Chun vs. MMA in a real fight, where there are no rules, at that point, it comes down to skill.

Why MMA loses to Wing Chun

As stated above, Wing Chun practitioners seek to end a fight as fast as they can. They do not want to fight. If they do fight, they have no other choice but to do so. Ending a fight fast involves going for soft spots. Eye gouging, the neck, the groin, the joints of the body, if it a soft part of the body, a Wing Chun practitioner will go for that part like a predator goes for prey. One may see more fights on the UFC, but the UFC is not real life. In real life, as stated above, you cannot count on a referee to break up a fight if things get out of hand, you cannot expect it to be a one-on-one fight—a street fight is not a sport. The danger is real, and a Wing Chun practitioner is going to be trained with that in mind.

The East vs. West clashes

When doing research on the web, you will find people trying to attack one martial art or another. Some may call those people hardcore practitioners of their art, some may call them armchair warriors, some may call them ignorant. It is important to remember, when looking for a martial art that you want to take up, what you want out of it. Chinese martial arts are a long-term sort of lifestyle you pick up, whereas MMA tends to deliver results fast. The idea that a school is teaching you for your long-term benefit is something a lot of Americans struggle to grasp, partly due to media portrayals, partly due to our own education system of “remember this for the test,” and partly due to the fact that passion is still mistakenly seen as a potentially weird obsession. A kung fu Sifu is more often than not, also a life-coach, and they want you to prosper in their school. Sure, they run a business, but profit is not their bottom line.

Are there ways for MMA and Wing Chun to live in harmony?

Yes, there absolutely are. A lot of the conflict between MMA and Wing Chun are matters of the ego. Americans in particular have a hard time continuing something that does not show results in a “reasonable” amount of time. That idea of getting results, fast, is part of the hustle and bustle of American society. To give an example, in the original Karate Kid, Daniel LaRusso was initially very frustrated with Mr. Miyagi’s way of teaching—by all intents and purposes, chores. However, as time passes, Daniel realizes that the chores have an actual purpose. He learned how to fight with less effort than what a hardcore training regimen might achieve.

Make no mistake, in both MMA and in Wing Chun, hard work pays off, but the manner of the hard work itself is likely to differ, and both sides may look at the other and wonder how it can pay off. A lot of western martial arts practitioner will call Chinese martial arts “mystical,” and will probably joke about the concepts of Kung Fu being something for both mind and body.

MMA and Wing Chun can live in harmony through education of each other. There is no valid reason for these martial arts to clash with each other. The reason that they do, however, is the matter of ego, and a sense of “I’m right, you’re wrong,” and “This is wrong, do it this way,” mentalities. Both MMA and Wing Chun have their purposes, both martial arts were designed with a specific purpose in mind—Wing Chun is better than MMA on the street, and MMA is better than Wing Chun in the ring.

Whether you are looking into taking up Wing Chun or MMA, always remember to ask questions to yourself, and of the prospective school you want attend.

More and more MMA fighters have begun using Wing Chun in MMA. They’ve incorporated aspects of chi sao, the wooden dummy and trapping hands into their MMA arsenal. The close-quarters efficiency of Wing Chun is difficult to learn and integrate. However, a few MMA fighters are using Wing Chun in clinch range / trapping range in ways others thought impossible. MMA fighters like Anderson Silva, Tony Ferguson and Jon Jones are proving why Bruce Lee loved Wing Chun and used it as the basis of his own personal martial art (Jeet Kune Do). For those looking for an upper hand, Wing Chun offers MMA fighters worthy skills that can up their game. This “outside the box thinking” is exactly what Bruce Lee was trying to tell the world so many years ago!