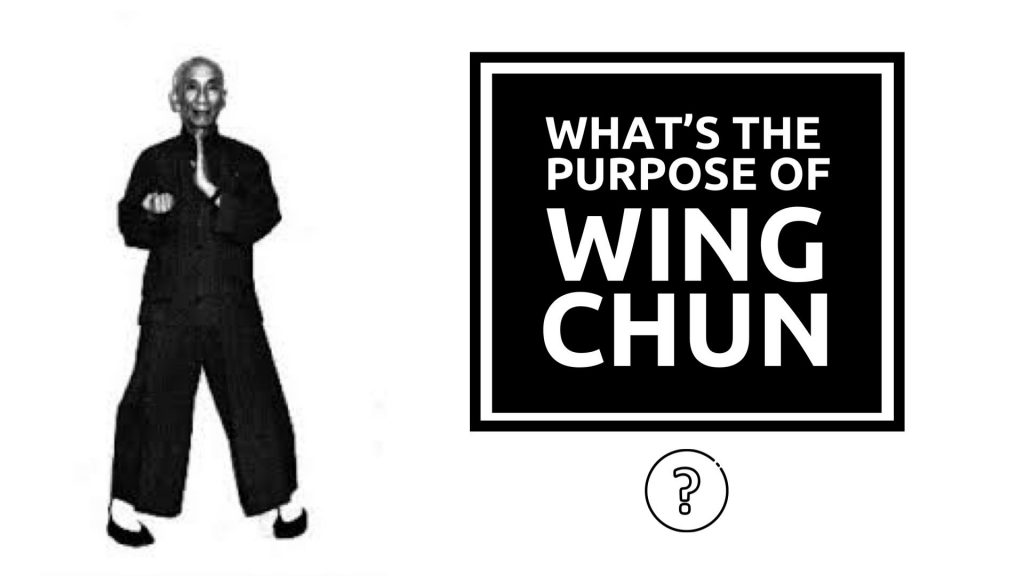 The purpose of Wing Chun is to learn how to defend yourself, but what really sets Wing Chun apart?

Wing Chun is said to be created by a woman named Yim Wing Chun. According to legend, she created the style of Gung Fu so smaller people could be formidable opponents to big and stronger enemies. Unlike many martial arts that focus a lot on strength and speed, instead Wing Chun mainly focuses on timing and positioning. The purpose of Wing Chun is to teach individuals how to defend themselves. During class, we focus on real scenarios and how to deal with them. Our responses to a dangerous moment are quick and swift, as Wing Chun focuses on the quickest way to disable an opponent, not about making flashy moves or kicks. See 7 concepts we use in “How to Defend in Wing Chun“. Wing Chun was also developed for internal use. We use the Wing Chun method to build our minds to be calm, focused and goal-oriented. When practicing this martial art, our minds must be relaxed and focused on the center of our opponent, if our mind can not stay calm and collected we are more likely to mess up or get hit.

Wing Chun was designed for girls and woman

There are many legends on how Wing Chun was created. The most common story told is about a woman named Yim Wing Chun. During the Qing Dynasty in the Ming Empire, there was a Shaolin Buddhist temple. A monk there named Ng Mui was walking in the forest, thinking about how she could better her Gung Fu; as she walked she heard a sound and look towards the direction the sound was coming from. As she continued to look towards the sound she saw a snake and crane fighting. She watched the elegant and precise movements very closely. She was mesmerized by the slick movements and position of both the crane and the snake. Ng Mui was so fascinated with the fight, she started analyzing the movements trying to combine them with her own Gung Fu. She mimicked the movement of the snake with her hands and positioned herself like the Crane. She spent days and months trying to perfect her new way of Gung Fu. When she honed in her new martial arts skills, she taught her martial art to a woman who was being bullied by an older man. This woman’s name was Yim Wing Chun. She was a beautiful girl whose looks attracted a man who would try to bully her into marrying him. Ng Mui despised what the man was doing, She couldn’t stand to see Yim Wing Chun being bullied. She decided to teach her Wing Chun, her specialized Gung fu, so that Yim Wing Chun would no longer be bullied by that man again. After a while, Yim wing Chun learned all that she could from here teach Ng Mui. One day while Yim wing Chun was walking by the woods the man who bullied here appeared and surprised her. The man grasped her by the arm, but Yim Wing Chun showed no emotion, she didn’t even get worried. As the man tried to pull her away, Yim Wing Chun became immovable, her structure powerfully connected to the ground like a tree with deep roots. Yim Wing Chun got out of the man’s grip, grasped his arm and yanked it straight down to the ground (forcing his head to jolt forward) while simultaneously punching the man in the face. (This move can be known as scissors gong) Since Yim Wing Chun stood her ground she was able to defend herself against a bully and that man never wanted to see her again. As time when on, she got married to a man that she fell in love with. She loved and trusted him so much that Yim Wing Chun taught him her martial art. From then on, Wing Chun was continued to be taught from lineage to lineage always holding the name of the woman who opened Wing Chun to the world, Yim Wing Chun. Wing Chun is made to take on and overpower bigger opponents through solid movements (structure).

The Purpose of Wing Chun

As you read before, Wing Chun is about protecting yourself and the ones you love. Wing Chun also thrives in close-quarter combat. When we as Wing Chun students have to fight, we will never do big flashy movies, our hits are always precise and driven to the center of our opponent. The ability to maintain this mindset of knowing the goal (the centerline), Wing Chun students avoid all the struggling energy and are able to position themselves in the most effective way so they can strike the opponent with a structured punch. There are many purposes to Wing Chun that do have a positive effect on your personality. Wing Chun is used as a meditation that calms the mind and allows you to have a laser-like focus to take down your opponents. There are many variations and purpose of wing Chun that can be applied to sports, work, and even our mindset. Without connecting the internal part of this Wing Chun to external movements, the connection of rootedness to the ground would be lost and your Wing Chun would not be able to show it’s true potential. In order to have outstanding Wing Chun, we must control the internal and external movements in everything we do.

Why is self-defense important?

In a world that is filled with so much love and joy, there will also be hatred and anger. There will always be those with egos, that are quick to fight and hurt others for there own selfish gain. As an individual, we have the ability to flee or fight in a conflict. There are many people that have many fears about life, some are even scared to go outside because of the fear of being hurt or ridiculed by others. Bullying is a huge epidemic around the world that needs to be stopped and many times words can’t stop it alone. There will be times where we must defend ourselves and/or loved ones. The ability to protect yourself is an amazing skill to have. Knowing Gung fu doesn’t just help protect you it also gives you a sense of confidence. Confidence can positively affect the way you act on a daily basis. There are many ways martial arts can have a profound effect on your life. Many people would think martial arts are all about fighting and nothing else, which would be extremely wrong. Wing Chun is so much more than just a powerful Gung fu, it’s an amazing way to learn inner peace and powerful life lessons. One of the biggest life lessons you will learn from Wing Chun is an immense focus. When sparring with others, as a Dragon Institute student, we must first relax our mind, make elbows heavy and push our shoulders down (Mi jong) while in a Kim yung ma stance. Holding and staying concentrated in this position, if done right, can make you immovable. The downside is when focus wavers and you start following your opponent, you start to lose track of your goal and be lead by your opponent. When people are on a path to a goal they must accomplish there will always be false stimuli, meant to take you away from your goal. As a Wing Chun student, we are trained to use our laser-like forces to see past the fog and get to our goal.

What Wing Chun was Not Designed For

Wing Chun is a formidable martial art made to take an opponent out quickly without rules or limitations. Wing Chun doesn’t participate in competitions versus other schools or martial arts. The reason we don’t is that Wing Chun is for self-defense, not sport. Many of the moves of Wing Chun are very small movements that lead to an explosion of power. Wing Chun is not made to feed someone’s ego. The truth is people, that can’t set aside their own ego won’t reach their full potential in Wing Chun. When a student is unable to set aside their emotions or ego in a fight the conflict will get out of hand, the fight will just be a match of who’s stronger and tougher, and that’s not at all what Wing Chun is about. Wing Chun is a meditation martial art that starts with a relaxed mind. Every movement we make isn’t ruled by our emotions, our movements are made by the stimuli of the opponent. At the Dragon Institute our students never start the fight, but our students are trained to finish it without making any flashy or big moves, like kicks above the waist or swinging your arms to hit. We understand that many people have difficulty not getting into conflicts or controlling their emotions and that’s okay. Wing Chun is meant to find control where it feels like there is none. We welcome new students seeking martial arts and inner peace.