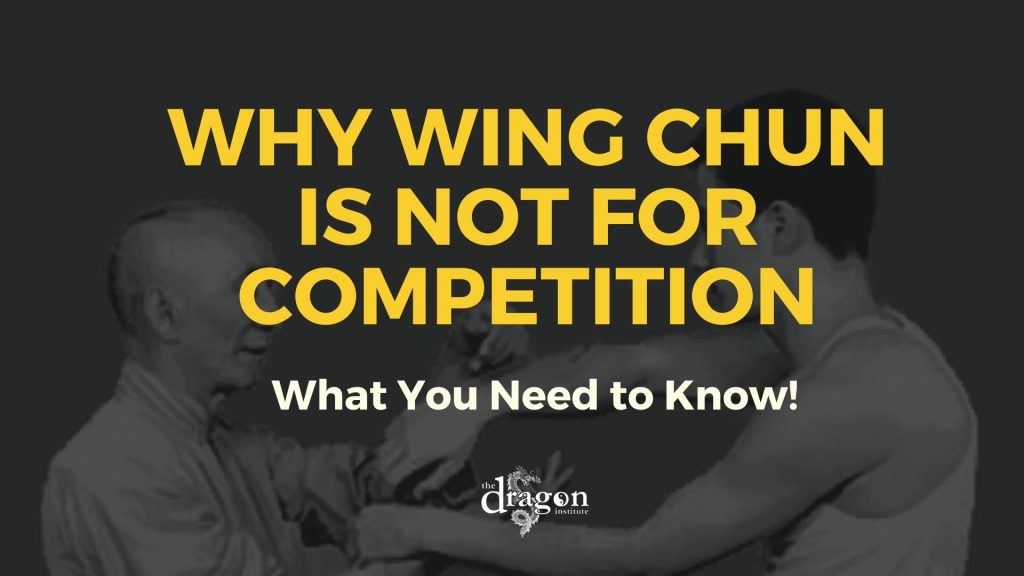 Wing Chun is Not for Sports Competition, Here’s Why..

In this article, we’ll take a look at why Wing Chun is not for Competition. This will give you what you need to know about the limitations of combat sports and the very distinct differences between them and Wing Chun as well as other practical martial arts for self-defense.

As MMA becomes more and more ingrained into our culture, its shaping how people think about fighting as a whole.

This is what many either can’t understand, or simply refuse to acknowledge.

Too many people simply don’t understand how different combat sports and self-defense are from one another.

Let’s take a look at the many differences between self-defense training and competition-based training.

The Mindset of Self-Defense VS. Sports Competition

Instead of looking to participate in a fight with someone, the self-defense practitioner looks for ways to not participate. That means finding ways to not put yourself in compromising places and situations. It also means learning how not to fight, how to control your temper and how to be non-confrontational. Sometimes it means de-escalation and escaping the situation. Self-defense training prioritizes this. Competition-based training never touches it. Very rarely does “raising up” or pitting aggression against aggression ever diffuse situations. In sports, participants agree to the idea of hurting the other person. Some even enjoy it. They know full well that that’s what they will be doing if the fight goes the way they want it. Developing this goal lends much more into a mindset that promotes participating in fights than it does to try to get out of them.

Developing effective self-defense reflexes and Wing Chun positions are different than sports-based training. Sports practice in gloves, with pads, using techniques which are legal in sports. These limitations can’t be denied. For instance, since there are no strikes allowed to the throat, palm strikes or chops to the throat are never practiced in sports. However, in Wing Chun, practicing to deliver palm strikes must be drilled over and over in order to make it second nature (palm strikes can often be better in self-defense situations). For a self-defense practitioner, training to specifically attack soft targets is a crucial part training. The specific reflexes you develop in your training will come out in self-defense situations.

In combat sports, knocking out an opponent is a goal. However, since Wing Chun is for self-defense knocking out an attacker is much less probable considering you may be much smaller than your attacker. Just as a flyweight would never be expected to knockout a heavyweight, a self-defense practitioner shouldn’t either. Instead a self-defense practitioner should practice with the assumption that their opponent is bigger and stronger than them. Therefore, much less emphasis should be placed upon striking power. Rather than an emphasis on power, developing precision into an attacker’s soft targets should be prioritized along with bareknuckle and empty-hand strikes. This coupled with the ability to root through Wing Chun’s structural stability changes the focus to having the attacker run into your rooted strike with their soft target.

Self defense isn’t always the same as 2 people willingly entering into a fight. There are strategies that work in competition that could get you killed in a real life situation. For instance a reliance on ground fighting is one of the worst strategies for self-defense. Even Rickson Gracie says: “Jiu-jitsu for competition doesn’t translate to jiu-jitsu as a martial art because of all the rules.” “About 50 percent of the techniques used in tournaments develop terrible reflexes and positions for use in a real fight.”

Self-Defense is About Awareness Skills

Self-defense is about awareness first and foremost. Its largely about not-participating in a situation. Competition is exactly the opposite. It is about purposely engaging in a situation in order to compete against a willing and ready opponent. Self-defense, on the other hand, has many aspects to it. But the act of voluntarily participating in a fight with another person is never one of these aspects.

While real self-defense training should involve pain, fear, surprise, and working from the worst possible positions, it also needs to address not getting there in the first place.

Often, success in self-defense situations are determined at choices made the early stages. Before things get physical, self-defense has already started.

Many competitions focus on stalling and holding position. Real fighting isn’t stalling, holding or delaying things. Real fighting is an onslaught of attacks. In self-defense, attack is your best defense. Self-defense fighting is less about defending and more about attacking than combat sports. Because both opponents in sports competitions are so “guarded”, matches are often largely based upon defending and running out the clock.

Propaganda – If its Not in MMA, it’s Not Effective

MMA propaganda says “it its not in MMA, its not effective.” This opinion is a deliberate attempt to discredit any martial art which isn’t seen in the sport of MMA.

But the truth is, all martial arts have value. Some work well based on the rules of MMA and others have different goals.

However, due to the popularity of the UFC, the MMA propaganda machine is alive and well. In fact, it has and continues to influence the opinions of countless people and none more powerfully than those ages 16 to 25.

As more and more people flock to MMA, arts such as Wing Chun are trusted less and less in the public eye.

However, there are several martial arts, such as Wing Chun, which are specifically designed for self-defense, not sports. Any attempt to compete in sporting matches negates the very essence of its purpose. The devastating advantages which make Wing Chun so effective for self-defense are the barred in sports competition.

Too often, people are so paranoid about not ending up in a “crappy” martial art school that they go to MMA or another combat sport when what they REALLY want is practical training for self-defense. But this misses the point. Training in an MMA sport for self-defense is like playing basketball in order to learn baseball. The objectives are not the same and neither are the rules. This is why sports training will always have serious limitations for self-defense.

So these are several reasons that Wing Chun is not for competition. Competition martial arts simply aren’t for self-dfense.