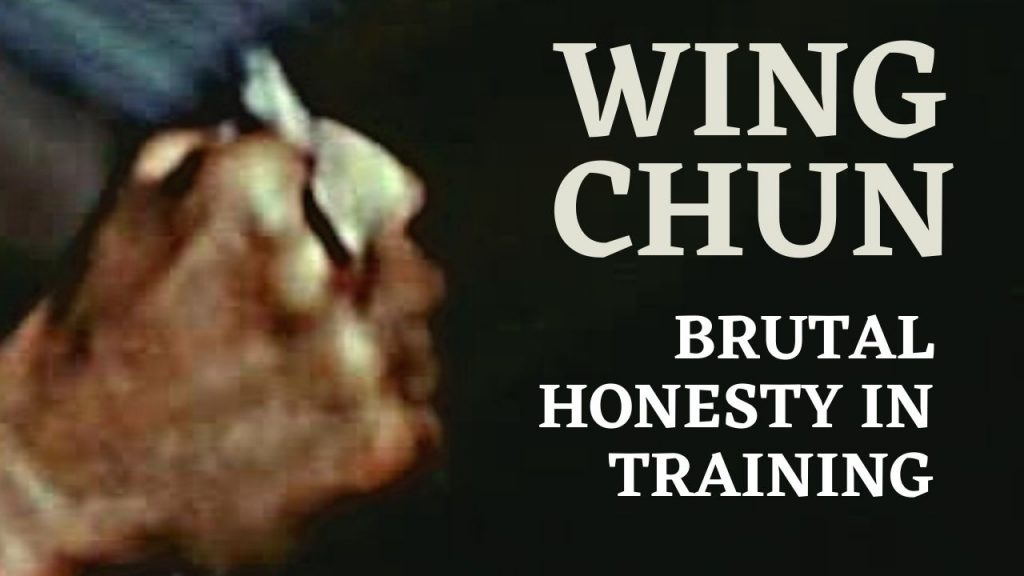 If you’re not being brutally honest with yourself or your training partners, how can you think you are simple, direct and efficient?

Anything Less Is Not Simple Enough!

It is time! No more lame excuses. No more ignoring it. No more hiding from the truth.

The art of Wing Chun is supposed to be about simplicity, directness, practicality and efficiency. In a nutshell, Wing Chun is meant to be honest. So why have so many of Wing Chun’s training methods become the complete opposite of its purpose?

In this article, we will try to uncover these reasons. We’ll look at the complexity which has developed and the lack of direct, honest training that goes with it. We’ll also look at other factors that have played a part in complicating our current day Wing Chun training methods.

When we look at the current state of Wing Chun, we have the success of the Ip Man movies to thank for making Wing Chun as popular as it is today. But the truth is that by and large, people just don’t seek out Kung Fu any more. If you are a Wing Chun practitioner who is interested in promoting the art and bringing it to more people, you are fighting a losing battle. Today’s generation is being led to believe that mixed martial arts is the way to go. And we really have the rise of the UFC to thank. UFC’s competition-based entertainment captivates audiences much more than a non-competitive self-defense art.

In addition to this, we’ve also all seen the videos of Wing Chun being tested against MMA. Whether it is in the early days of the UFC or against another MMA practitioner, the results often aren’t pretty. Of course, what happens next? We basically try to separate them from us. We attempt to justify why “their Wing Chun” failed. In the public’s eye, these challenge videos are proving to them that Wing Chun can’t handle mixed martial arts.

Listen, the fact of the matter is that the art of Wing Chun is under outright attack. Its reputation, its legacy and its effectiveness are all under more criticism than ever before. The belief in the art which was shared so strongly in Hong Kong back in Ip Man’s day is a mere a memory. It simply does not exist any more, at least not amongst the masses. As more and more people take up MMA and those combat sports which dominate in the octagon, they normally become convinced of the idea that anything that isn’t successful in the UFC is ineffective. Why? Because they have bought into the idea that the UFC and MMA are as real as it gets. They believe that the rise of the UFC has separated martial arts into those that work and those that don’t. Therefore to these same people, anything that hasn’t had success in the UFC is now considered fake. Due to shear numbers, these same MMA enthusiasts convince others of this same idea.

Now you’re probably thinking that Wing Chun is not for competition. It is for self-defense. But even so, shouldn’t Wing Chun still hold up to challenges from others? Shouldn’t the simplicity, directness and efficiency still dominate these combat sports? Of course it should. Even though Wing Chun is for self-defense, it’s simplicity, directness and efficiency is also meant to handle all kinds of threats. Its time we all stop making excuses every time Wing Chun is shown up in a challenge match.

Its time to stop spending so much time online arguing amongst ourselves on forums and groups. The answers aren’t found online in forums. Maybe the answers are much simpler than a debate complicates them.

Its also time to stop relying on your lineage. The idea that your lineage is more authentic, practical, internal or proper than someone else’s is completely irrelevant to your own honest ability to apply. What does it matter if your grandaddy could beat up someone else’s grandaddy? When you think of it this way, you can see the silliness of lineage superiority claims.

This obsession of training how people did “in the past” is a REAL problem in Wing Chun. Wing Chun practitioners as a whole place way too much emphasis on what people did “back in the day” trying to find out their “secrets”.  Living in the past is like relying on Ip Man to do the work for you. But if Ip Man can’t do the work for me, what is it that we must do?

The simple answer? Train more honestly. This is the number one issue that is wrong with Wing Chun… a lack of brutal honesty in training. Honesty is neither pretty nor nice. But what it is, is simple. It is direct and it is efficient… exactly what Wing Chun was meant to be.

I’m talking brutal honesty. You know, the kind of truthfulness 95% of the world can’t handle. I mean the kind that cuts deep like a knife in the gut slicing through any lies you’ve allowed to become part of your comfortable zone.

Honest training means sparring of some form against fully resisting opponents. It means making no apologies for hitting your training partners square in the chin. It means bloody lips, bloody noses and bruises from head to toe. If you are not willing to fully accept these possible outcomes then you are simply not training honest enough.

Yet by its very nature, honesty, even brutal honesty, is good. Because it’s the truth. You can’t fake it. Fighting is the honesty of the art. There is no possibility of cheating nor covering up mistakes. No amount of over theorizing, over analyzing or over drilling will ever be as simple and honest as fighting.

In chi sao, sparring and drill work, training honestly means not pulling your punches. It means fully agreeing with your partner that hitting each other and getting hit is the only path to honest ability. And it means hitting each other hard enough to where you would either stop them if they were coming into you or force them back if not.

When you bring this level of honesty into your sparring, there’s no question of who had a better position, who got there first or if the hit would have stopped your partner. When you get hit, it means taking full responsibility for it and recognizing it as your mistake. Taking this approach to training creates a clear agreement with your sparring partner to keep the main focus on hitting. It keeps everyone accountable for their mistakes rather than trying to blame or cover them up.

So its time ask to yourself how honest you are in your training? Do you even spar and if so how honest is it? If you see a lack of honesty in training at your school, maybe its time to demand more for yourself. Maybe its about demanding more from your kung fu brothers and sisters. Or maybe its a discussion with your sifu. The real question is how far are you willing to go for the sake of simplicity? Because that’s what this is really about. Honesty, brutal honesty, is the only way to simplicity.