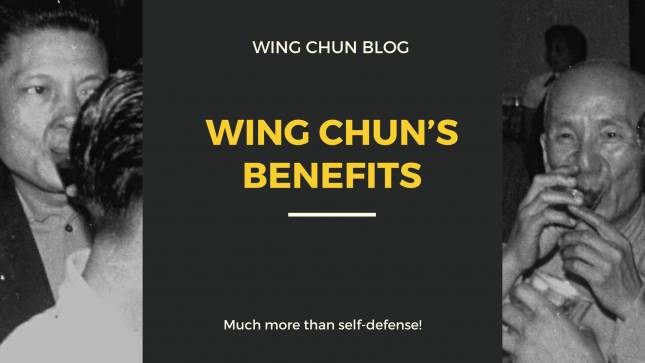 When anyone takes up any sort of martial art, the reasons vary greatly. Some do it to learn how to defend themselves, lose some weight, or even to just get out of the house. No matter the reason, the reasons tend to always have a common root: health and wellbeing. In this article, we will discuss what Wing Chun is good for and some of the Wing Chun’s benefits for self-defense and overall health of both the body and mind.

What are the main benefits of Wing Chun training?

When it comes to practical self-defense, Wing Chun’s effectiveness in close-quarters hand-to-hand combat is pretty hard to beat. This is why realistic self-defense experts often choose Wing Chun because of its in-close pressure fighting specialty.

Wing Chun effectiveness lies in its emphasis upon simplicity and functionality over fancy, inefficient movements. Everything Wing Chun does is direct and to the point.

Wing Chun is founded on the concept that a smaller, weaker person can successfully defend themselves against a bigger, stronger, heavier opponent. This is accomplished by using concepts of efficiency, physics, geometry and anatomy to use an opponent’s force against them.

So what is Wing Chun good for?

When a person learns Wing Chun, they learn…

The Mental Benefits of Wing Chun

The mental benefits of Wing Chun include confidence, clarity and a simpler more efficient way of thinking. The art demands it. Because there’s really no way to become successful at Wing Chun without changing the way you think. The bottom line? Wing Chun changes your philosophical approach to life.With relaxation, simplicity and efficiency at its core, Wing Chun requires that you reshape how you look at problems and their possible solutions.

The Emotional Benefits of Wing Chun

The emotional benefits of Wing Chun include confidence, clarity and a simpler more efficient way of thinking. The art builds confidence through trial and error. When a Wing Chun practitioner learns how to intelligently defend strong attacks they build confidence in their fighting abilities. This empowers the Wing Chun student to have less fear of fighting.

The first is, of course, a better range of motion and mobility that comes with the physical training. The second benefit, the mental benefit, is a more subtle benefit. Wing Chun is good for both your mind and body in ways you will not expect. In the hustle and bustle of modern day society, Wing Chun is good for teaching us not to be rattled by others. It teaches us to stay focused, block out noise and remain centered and grounded. Wing Chun gives us the strength to remain rooted to ourselves, and it gives us presence of mind to look at things differently.

What are health benefits of Wing Chun Training?

Of course, right off the bat, one of the answers is an improvement to fitness—weight loss, stamina, flexibility, strength and cardio. In addition to the overall improvement to fitness, the mind gets a working out too—specifically in awareness. Wing Chun health benefits truly shine in its synergy of mind and body improvement. You will not improve only one aspect of your body, but many! Wing Chun actually has qigong built into it. It is a form of both meditation and energy work. The awareness gained through training Wing Chun can be applied to everything we do in life.

What are some Wing Chun benefits for kids?

A martial art taken up at a young age is an absolute boon for them in the long term. Kids learn how to focus when prompted to do so. They learn early on that there is a time for focus, and there is a time for play. Learning how to focus leads to better discipline that is instilled at an early age. They learn self-confidence, but not a puffing out the chest kind of self-confidence. They know they can do things, and they can follow through. Martial arts development goes hand-in-hand with character development, and setting kids on the path of Wing Chun early on can do wonders for their own growth and development of character.

What are some Wing Chun benefits for adults?

A martial art taken up at an adult age can be a great challenge to the potential practitioner. Unlike a child, an adult has the ever-present challenge of fighting off ego as they learn. A major benefit of Wing Chun for adults is the ability to let go of their ego in order to hone an untapped potential they may not even be aware of. Ego is something that adults will almost always have to fight off when becoming a student of anything. Once they have learned to let go, they can focus, hone, and sharpen a new skill that can very well encompass their entire life. Wing Chun is universal, it is not just for self-defense!

What are some Wing Chun benefits for women?

Wing Chun is a highly aggressive martial art that women can take full advantage of if a self-defense situation arises. Furthermore, Wing Chun teaches all students that you DO NOT need to defend yourself ONLY when you are on the ground. Some martial arts teach you how to defend in a situation when you have already been thrown to the ground. Why wait until that happens? Wing Chun will teach you to defend yourself before an attacker can even attempt to throw you. Similar to children, Wing Chun can give women a self-confidence where they know they can handle a situation.

What are some Wing Chun benefits for seniors?

Wing Chun is a great martial art for seniors because it is a martial art that can be started at any age range. It has physical training, but not an overwhelming amount that might aggravate parts of the body that might suffer from some kind of condition that comes with age. Practicing the first empty-hand form of Siu Nim Tao can even help to strengthen your spirit through its Qi Gong aspects, which in turn can add years onto your life.

What are some Advantages and Disadvantages of Wing Chun

The advantages of Wing Chun are numerous! To keep it condensed, however, let us look at a few of the biggest advantages of Wing Chun. Learning how to relax is one of the absolute biggest takeaways from this martial art. Believe it or not, learning how to relax—truly relax—when pressured is one of the hardest things to master. Learning relaxation in a self-defense situation is one of the biggest lessons learned in Wing Chun. Flexibility comes with Wing Chun. However, it is not just learning flexibility that comes with this martial art. You will learn just how flexible the human body is through Wing Chun. Finally, you will learn how to defend yourself with a brutal efficiency. You will learn to end a fight before it can get out of control. You will learn to always go for the bullseyes of the human body, every single time.

What are some benefits of Wing Chun dummy training?

The Wing Chun Mook Jong, or Wing Chun Wooden Dummy, is an essential part of training in Wing Chun. It teaches us how to strike at an opponent, using energy pathways, to take control of their centers. It teaches us how crucial positioning is, and why positioning is so important. Also just as important, is learning simultaneous attack and defense using both arms and both legs. The dummy is also a trainer of sequenced movements, which, over time, will develop into your muscle memory. These sequenced movements are also a fantastic trainer in teaching combos that can be use your opponent’s force against them. We are all about overcoming the bigger, stronger folk, and one of the best ways of doing so, is using their own force against them, which is learned through development of the Mook Jong training. Furthermore, you learn how to efficiently move around the dummy, keeping your movements precise, and maximizing your ability to hit that center.