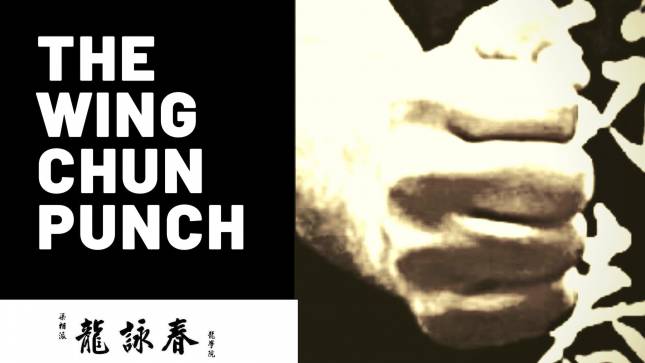 Have you ever dreamt of being in an IP MAN movie like I have? For those that don’t know, IP MAN was Bruce Lee’s Wing Chun sifu (teacher). That’s what recently drew me to learn how to do Wing Chun. One of the coolest moves IP MAN does is the vertical Wing Chun punch. Despite watching it over and over, I STILL didn’t know how to punch like IP MAN. So I searched the web for “How do you punch like Ip Man”. I found some outstanding Wing Chun lessons online, learned what chain punching was and more. So in this article you’ll learn how to do Wing Chun Punch. I’ll go through the different types of Wing Chun punches (like chain punching), how to punch correctly and the advantages the Wing Chun punch has.

In his video, How to Chain Punch (Tutorial), he states that chain punching is about chaining your attacks. They are a continuous onslaught of an attack, like a machine gun.

The One-Inch Punch, made popular by Bruce Lee, involves harnessing the power of larger muscles and linking the joints into one tiny spot. It delivers a tremendous amount of force from only an inch away from the opponent.

Is your Wing Chun punch working?

According to Enter Shaolin, one of the first things you learn in Wing Chun is throwing a proper straight punch.

Well, it is a lot more intimidating than you think. The Wing Chun punch, if done properly, feels like stabbing someone with a sword or a knife. The feeling is very painful and penetrating if you ask anyone that’s been punched by it! Beginners are warned that being too tense and not connecting with the body correctly will have a negative impact on their punch.

Don’t worry, we’ve got this!

We’ll go over some steps to punch properly so our punches can deliver maximum impact.

Speed, Energy, and Strength The One, Two, Punch!

The Wing Chun Punch consist of speed, energy, and hand strength according to the London Wing Chun Academy.This is quite an important move since it is associated with The Six Harmonies.(wrist, elbow, shoulder, hip, knee, and ankle). The punch is quite faster than other punches because it is in a shorter distance between 2 points. Having acceleration in the strike will be more successful. Through relaxation and structure you’ll be able to build tremendous energy. How your knuckles are structured during the strike is critical for the impact it can cause. Having a vertical fist is important, with a horizontal fist you are more prone to injuries and severe damage in the knuckles. Your hand strength can be developed through striking a Wing Chun wall bag. Here are some steps to help you punch:

So you have the steps, but does this move really make an impact?

Advantages of the Wing Chun Punch

There are many advantages that come with learning the Wing Chun Punch (also known as the Chain Punch and referred to as the machine gun of punches), but don’t forget that it’s only one part of self defense training. To learn more you can visit this self defense training article.   According to Wing Chun Life there are many benefits to the Wing Chun Chain Punch, such as invisible speed, interruptibility, trapping, accuracy, and power. When this strike is done correctly it is quick enough to look like a blur.. Interruptibility means you can use it to attack, retreat, counter-attack, defend, and block. Trapping is kind of like a machine gun, where you are punching in rapid succession. But it also gives you the opportunity to block or cover your target’s arm as you are attacking. With the techniques of interruptibility and the straightness of the punch causes the strike to be more accurate. If the strike is done right, it is more powerful than any other punches, where your target will be able to feel the punch even hours later after it has happened.

From only an inch away (or less!), Bruce Lee was able to deliver an explosive blow that could knock an opponent off of the ground. If you’re like me, you have probably wondered how in the world this is possible? Well, it turns out that there is quite a bit of science behind it!

Let’s start with the biomechanics of the punch. Although Lee’s fist travels a very small distance in less than a second, the punch involves complete full-body movement that starts with the legs. Upon closer observation, you can see that his legs straighten with an explosive knee extension. The quick jerk of his legs increases the twisting speed of his hips. This action causes his the shoulder of his thrusting arm forward, thus driving his fist forward. At the final moment of the punch, Lee flicks his wrist to further increase fist velocity. After landing his punch, Lee retreats immediately, compressing the force and making a greater impact.

By the time the one inch punch has made contact, Lee has combined the power of bigger muscles into a tiny area of force. Strength is less of a factor, as coordination and timing are truly vital to making the one inch punch work. Lee must combine his movements so that each period of acceleration follows the last one instantly. So now we know that coordination is key.

How Can I Learn the One-Inch Punch?

The One-Inch punch takes practice and skill developed over time. However, by following the steps below and practicing on a consistent basis, I think we all have a shot at being able to execute this awesome punch!