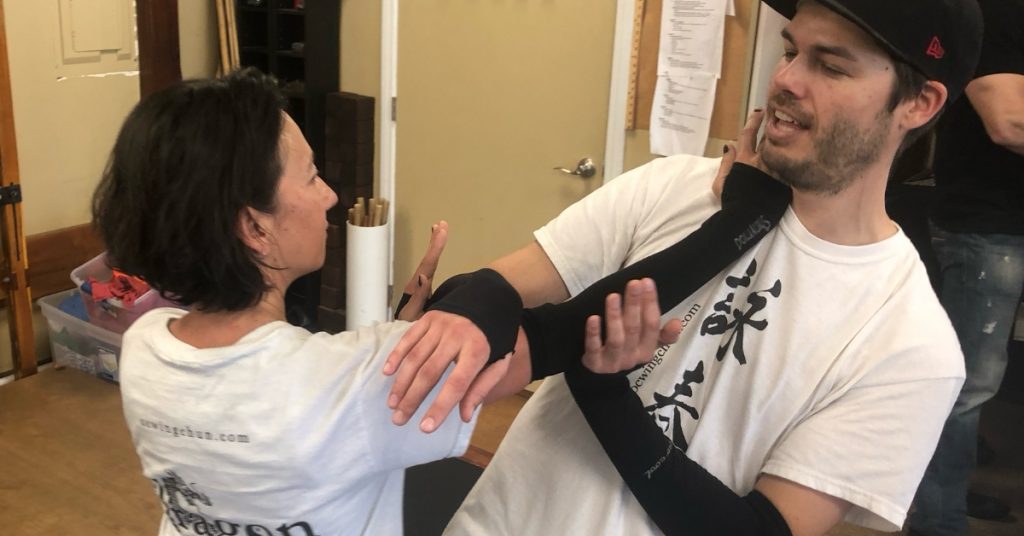 Confidently defend yourself and your loved ones. Our OC self-defense classes in (Orange County) teach you to  realistic and effective self-protection. Our  classes give students the confidence that they need to protect themselves in true self-defense situations. We do not train for sports competition. As a student of The Dragon Institute, you will learn how to apply practical self-defense in Orange County. The basis of our self-defense training uses the art of Wing Chun and use a larger attacker’s strength against them. However, we are also not limited by traditional martial arts thought. Our training is not meant to preserve tradition, it is designed to teach real self-defense skills. Because of this, we use realistic training methods, against resisting, uncooperative sparring and aliveness training. In addition, we also train self-defense realities against modern weapons such as sticks, knives and guns. Through positioning and leverage, our Orange County self-defense students learn that being smaller can bring its own set of advantages.

Our approach to self-defense training specializes is no-nonsense, street-practical, close-quarters combat. Students learn quick punches and low kicks with a tight defense, coordinated through agile stances and efficient footwork for a quick advance. The effectiveness of our self-defense training program lies in its superior efficiency including well coordinated counter attacks along with simultaneous defense.

Here’s a taste of some of the simple self-defense concepts we teach:

Our Orange County self-defense training is highly effective in realistic confrontations. As a result, many military and police personnel have chosen our self-defense program for its devastatingly effective close-quarters, hand-to-hand combat.

What’s more, true self-defense is much, much more than just knowing how to physically defend yourself. Learning our program of self-defense in Orange County means learning the mental, physical and emotional realities of self-defense. Due to the confidence gained from your training, you will feel more confident and capable of handling yourself in confrontations. Because of this, you’ll carry yourself differently, think differently and act differently. Others will see you differently and interact with you differently. You’ll have an overall higher awareness of your surroundings. The benefits achieved from our Orange County self-defense classes are truly priceless.

Our classes are suitable for all ages and fitness levels. Private self-defense training is also available. Our award winning Orange County self-defense classes are appropriate for just about everyone!

Here is an article to learn more about… 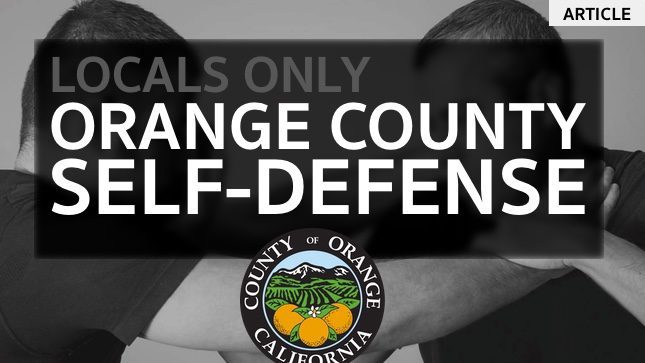 What are the main reasons to learn self-defense in Orange County?

Orange County, CA is known for having relatively lower crime rates compared to other parts of the U.S.A.. With that being said, one might ask “Why would I need to learn how to defend myself in such a safe neighborhood?” Safety starts with yourself, and it is even more important to know how to defend yourself in a safe neighborhood for one simple reason: you will not expect any crime to happen to you. Orange County Self-Defense is just as important to know because of that sense of safety. If YOU don’t feel safe, then all of O.C. can’t help you feel secure. If someone attacks you, do you want to panic, or do you want to put down the attacker?

What could happen if you don’t know self-defense in Orange County?

What are some self-defense benefits for adults?

We live in turbulent times, and yet, despite that, it is still VERY easy to live in complacency. There is often a mindset of “this place is a safe place, I should be fine,” and the result of that sort of mindset often leads to sheer shock and horror when a shooting happens. One of the first things that people say on the news in response to a shooting is, “You never think it’s going to happen here.” This is, unfortunately, part of the problem. It is a dismissal of reality, where ANYTHING can happen.

So what can our self-defense program do to change my complacency?

The two biggest and most important elements that our self-defense program teaches are not of a physical aspect. They are mental aspects. Relaxation and awareness. When you are put into a situation where you need to defend yourself, a cool-head can be a huge factor in whether or not you can defend yourself well or poorly both during and after the fight. Our self-defense program trains you to end a fight quickly—with only one or two punches being the ideal. As mentioned above, we live in turbulent times, and a relaxed mindset is all the more important to have in navigating life as we know it right now. A relaxed mindset will help you IMMENSELY in dealing with uncertainty—not because of overconfidence, but because of the confidence in your ability to handle whatever is around the corner, without making a huge deal of it. Our self-defense training on relaxation does not teach you to always be at the ready for something to go wrong, mind you. It teaches you to be ready for when something does go wrong in a way that can best be described as “flipping a switch.”

It is imperative to note that the relaxation that our self-defense program teaches is not to get you hypersensitive, but to train you to be ready for when push comes to shove.

Why is practicing awareness so crucial to self-defense?

Awareness is the first step in a self-defense situation. All fights begin with the mind. Relaxation and awareness go hand in hand—relaxation lets you assess your situation calmly, while awareness lets you answer your own question about a would-be attacker quickly. Remember that you may not always get the luxury of time when you are put in a self-defense situation. Awareness that is honed allows you to ask and answer your question about a would-be attacker in an instant. It allows you to put down an attacker before a fight has reached a “breaking out” point. For you Star Wars fans out there, it allows you to be like Han Solo and shoot first at all the Greedos out there, because Han knew that if he didn’t shoot first, Greedo would have. Awareness allows you to finish a fight before it can begin.