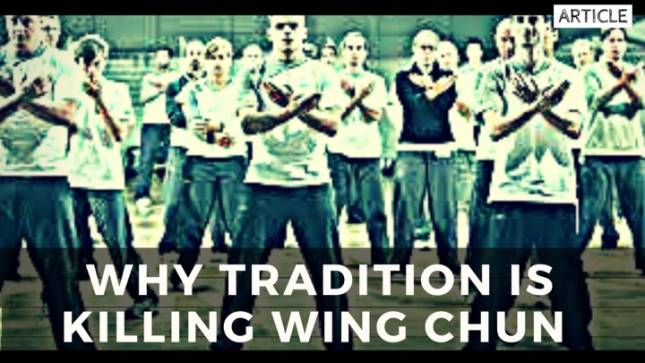 Almost anyone who loves martial arts knows of Ip Man, the Wing Chun teacher of Bruce Lee. In Ip Man’s day, Wing Chun was highly regarded for its practicality and effectiveness. However, less and less people today look to Wing Chun.

As other arts have progressed to deal with ever evolving threats from long range fighters and take downs, Wing Chun practitioners, for the most part, have stayed inside their “chi sao bubble” of traditional close-range training.

This is why, as a 23-year Wing Chun practitioner, I have a difficult time recommending Wing Chun to anyone. In most cases, the art is taught with too traditional of a mindset in order to be sure of its quality. Now, don’t get me wrong, knowing the art inside and out like I do, the art itself is nothing short of genius. But the reality is, the modern state of Wing Chun training isn’t living up to its application potential.

Here’s why: For most Wing Chun practitioners, preserving tradition is more important than handling modern threats. This unhealthy dependency upon tradition has blinded its practitioners to some of Wing Chun’s most obvious modern needs.

Rigid Definition of What Wing Chun Must Be

All the issues surrounding Wing Chun’s lack of evolution boil down to ideas of rigidity. Wing Chun practitioners, for the most part, hold a very rigid definition of what Wing Chun must be. This generally stems from the prevailing idea of attempting to “preserve” the art rather than continually evolving it. Too often, people in Wing Chun look to practice exactly as Ip Man did. This focus upon “passing on a tradition” is viewed as noble within the Wing Chun community. Yet, this exact focus upon preservation is what is killing it.

Wing Chun is meant to be a living, breathing, ever evolving art. Rigid definitions of the art attempting to preserve it only bring Wing Chun closer to becoming obsolete. When Wing Chun is free to evolve based upon modern, practical needs, it is alive. It is thriving. And because of that, it is respected. Respect doesn’t come from legends of the past. It comes from honest ability in the present.

The only way to break free from this rigid mindset is hard work. Wing Chun has to be honest about training for application and continuous pressure testing. In other words, practical sparring where students are constantly hitting and getting hit.  Coming from a place where this doesn’t happen. This kind of change is going to be very difficult. However, if Wing Chun is to survive, honesty is the only way it can evolve.

This seems obvious from the outside looking in, but in an attempt to preserve traditional training methods, there is an overall lack of practical sparring. Instead, drills are prioritized in a dead pattern often without an actual stimulus. Because of this, the idea of manufacturing a way in has developed as practitioners attempt to force an opening out of nothing. However, Wing Chun is based upon acting simply and efficiently upon a stimulus, not forcing an opening. Trying to create or force a pathway misses the entire point of Wing Chun’s response-based nature.

What sparring there is, students are often confined by too many rigid limitations. Currently, in Wing Chun many Wing Chun practitioners only practice at a close range. Along with this, starting sparring only while in arm contact is a common practice.

It’s a common limitation to be told “don’t hit to the face”, “don’t kick”, “don’t attempt takedowns”, “don’t strike, only push” or “don’t follow through with your strikes”.

The truth? It’s more common to have Wing Chun practitioners go back and forth debating theory than it is to hit and get hit.

Another issue include an over reliance upon linking or bridging. Wing Chun is a striking art. Yes it blends aspects of stand-up grappling but the main goal of Wing Chun is to strike. Often practitioners get so used to “linking” and “bridging” with their training partners that they rely on this link for security. This creates a defensive-mindedness counter to the goal of striking. It creates what’s referred to as chasing hands. Although most Wing Chun schools consider this poor, almost all Wing Chun practitioners do it anyway. This goes to show that saying something is poor doesn’t matter when training methods often promote linking. This problem of saying one thing while doing another is very common.

Too many Wing Chun practitioners focus on trapping rather than hitting. This creates the idea of forcing a hit rather than the practice of asking for the hit. Constantly asking is the key to being able to find your way in. Trapping happens as a means to negotiate your way into your goal, but only after asking correctly. This is why trapping, in the sense of trying to trap, doesn’t work. It means that you are trying to create or force an opening outside the moment. The art of Wing Chun is about operating in the present, not setting up with combinations for the future. This is a big difference between boxing and Wing Chun.

I Gotta Be Close

To me, the entire art of Wing Chun is meant as a process to free you from limitations. Yet so many get distracted by the rules. If only they could see that the rules are merely guidelines to help point them to being able to evolve.