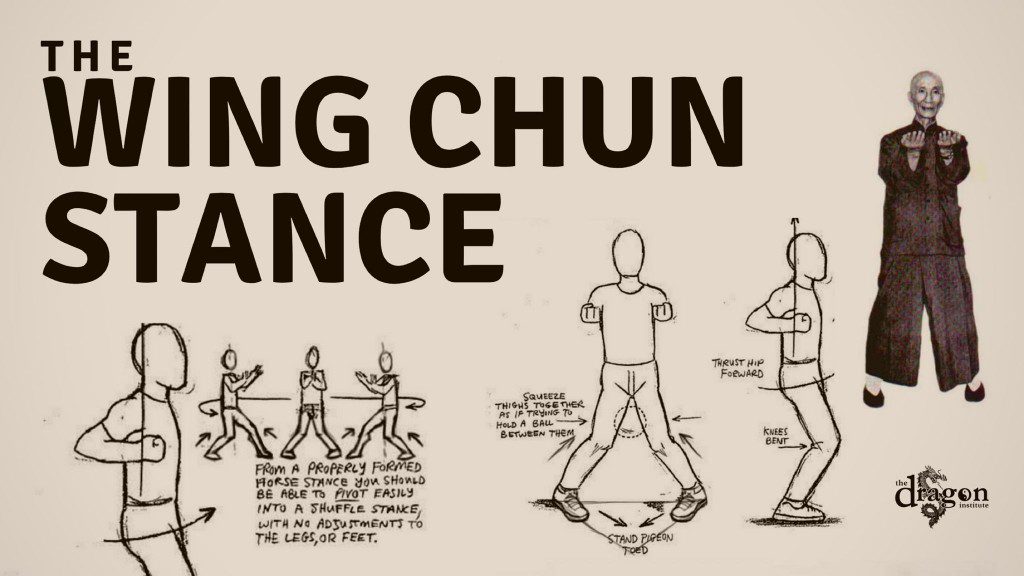 What is the Wing Chun Stance for?

To put it simply, Kim Yeung Ma is first and foremost for training. It is not meant to be seen in a fight. It is not a Wing Chun fighting stance, it is for building the all-important structure. All of the empty-hand forms of Wing Chun (Siu Nim Tao, Chum Kiu, and Bil Jee) start in Kim Yeung Ma, and they end in Kim Yeung Ma. It is at the core of any practitioner’s solo training.

The basics of the Wing Chun stance are easy to get down, but to master it, is another matter. At our school, The Dragon Institute, we have a list of things which make for a good, solid Kim Yeung Ma.

Starting from the bottom, we have Lok Ma, which is lowering your center of gravity and gripping the ground with your feet. We have an entire planet beneath our feet to draw our power from, after all, and keeping your center low makes connecting to that power easier.

Next up, is Ting Yiu, tucking the pelvis under the spine and trying to get the spine as straight as possible. We do this to help keep the flow of energy from the waist to the shoulders as unhindered as we can. Ideally, we want to have no bend in the small of our backs.

Following that, we have Mai Jeong—correct elbow position. In Wing Chun, we try to stay out of our hands, instead being much more mindful of our elbows and where they are. When training our Kim Yeung Ma, we have our elbows inward and forward. At the Dragon Institute, we like to remind each of two very important words in regards to Mai Jeong: Elbows down! If the elbows are higher than the hands, you are doing it wrong.

Moving higher on the body, we have Jung Dao (also referred to as Dung Tao,) which is keeping the head up. Many martial arts will tell you to keep your head up—that is to say, do not slouch. Wing Chun is no different in that regard. Keeping the head up is overall just an optimal thing to do. We prefer to think our heads are being suspended by a string when taking Jung Dao into consideration, to make keeping the head up a more relaxed practice, rather than having to constantly remind ourselves to do so.

Finally, we have Mok Lik—eye power and focus. This is also where the brain comes into the practice of Kim Yeung Ma. Cultivating Mok Lik is cultivating awareness. Higher level practitioners with good Mok Lik are able to take control of fights before they have ever truly begun. It is also a cultivation of instinct—that gut feeling that tells you that something is going to go wrong, and what to do before that something actually does go wrong. When a good Wing Chun practitioner has their sights on an opponent, properly developed Mok Lik allows them to discern very small movements that simply could not be seen in a rage.

Proper Wing Chun stance is being like an immovable tree. Highly refined Wing Chun structure can feel like you are quite literally trying to push a very sturdy tree. When everything is connected, when all of the above elements of good Kim Yeung Ma work together in unison, it is very hard to topple someone practicing their Wing Chun structure.

In addition to Kim Yeung Ma, there are two more stances that we utilize in Wing Chun.

The first of the two is the Doi Gok Ma, or the “negotiating stance.” This is our Wing Chun turning stance as it were, getting around an obstacle by going around it, or negotiating with the obstacle. Doi Gok Ma is what you will see being used when it comes to our pivots or our So Gurks, which starts in Doi Gok Ma, but ends in our other stance.

The second stance is called the Do Mah, or the “knife horse.” This is our Wing Chun advancing stance. In addition to the aforementioned So Gurk, you will also see Bil Mah steps utilized from a Do Mah. Often times, a So Gurk will end with a Bil Mah. At that point in a So Gurk, there is really no reason to not advance forward.

Why use Kim Yeung Ma in practical application at all then?

How can I cultivate my Kim Yeung Ma?

The long answer: Of the three empty hand forms, your Siu Nim Tao will be the seed in which all of your Wing Chun grows, your Kim Yeung Ma being one of the chief aspects among them. Cultivating your Siu Nim Tao is cultivating your Kim Jeung Ma on its own, as well as your elements of good form. Unlike the Chum Kiu and Bil Jee, which is mobile, Siu Nim Tao is focused at the beginnings of Wing Chun, and when it comes to Wing Chun stances, Kim Yeung Ma is the beginnings of a good, solid stance. In addition to the Siu Nim Tao, we at the Dragon Institute will also practice our Kim Yeung Ma by placing a wooden block about fist size between our knees, and, in the case of the more advanced students, also practice against a pillar or the support beam of a Mook Jong dummy, with the goal being to really strengthen our Ting Yiu by keeping our backs as straight as possible against what we are using to assist in our training.

The Kim Yeung Ma is one of those things in life that are easy to get the hang of, but actually mastering is another matter. Every student will be different in regards to progression, as is the case with pretty much any aspect of any martial art. Perhaps the most difficult thing to master of the Kim Yeung Ma is remembering that it exists. It is something you learn very early in Wing Chun, but given how awkward it is to use in application, some students might be prone to forgetting it exists when it comes to applying it in practical settings, such as sparring. When a student begins to speed up their pivots, they might forget that the brief time between the beginning and the end of the pivot is that Kim Yeung Ma, which is vital to the smooth transition of a pivot from one side to the other. All good footwork in Wing Chun is going to have some aspect of the Kim Yeung Ma in it, even if the practitioner is not doing a stationary Kim Yeung Ma. Both Do Mah and Doi Gok Ma have Kim Yeung Ma in them (Doi Gok Ma moreso than Do Mah.)

As always, however, be not afraid of taking the mastery of Kim Yeung Ma slowly. Always remember that, in any sort of physical activity that calls for pushing limits, is to find your limit, then go a little over that limit. Your training is for you, first and foremost.

Here is a video on Wing Chun structure…