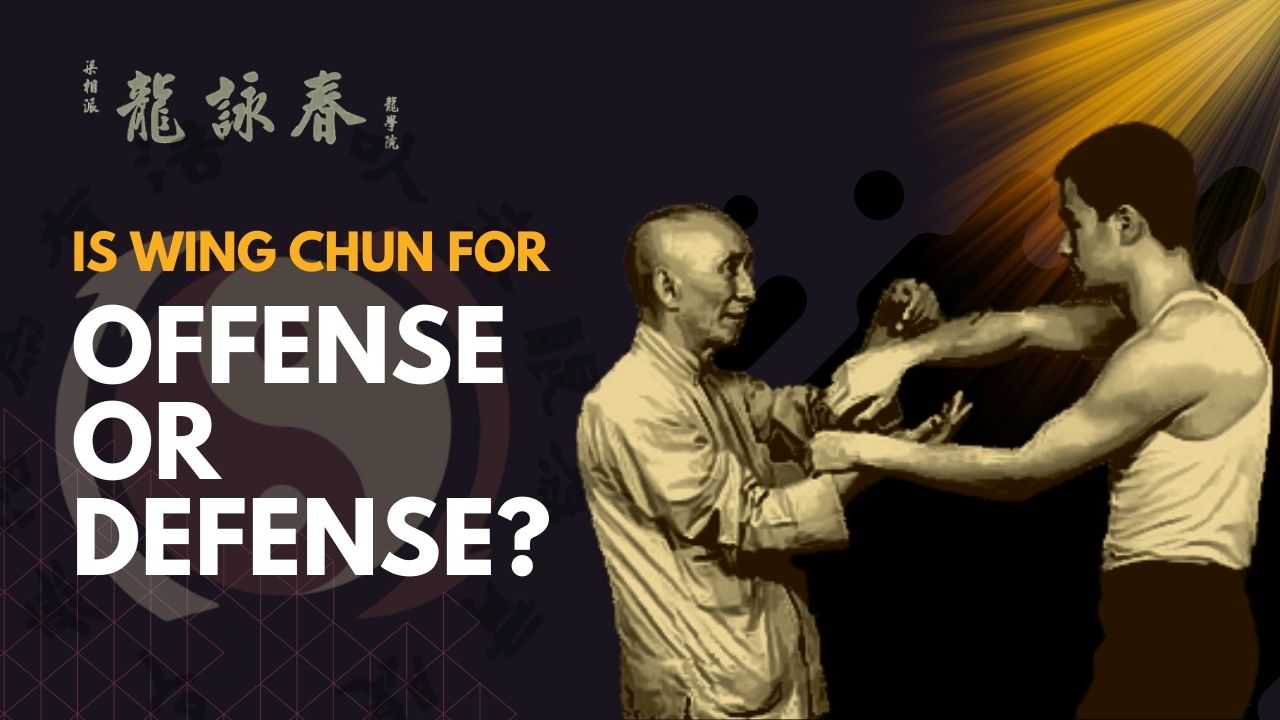 Does Wing Chun seek to strike first? Or does Wing Chun wait to counter before responding? In this article, it is my intention to break down Wing Chun’s overall fighting strategy.

Let’s face it, Wing Chun isn’t easy to understand. Although its concepts are simple, how these concepts work together can be a real challenge for some.

In fact, over the last 26 years, I’ve seen a good number of students fail to be able to fully comprehend how to put together these concepts into sparring and chi sao… even after years of effort.

Now, please keep in mind that my breakdown of Wing Chun is based upon Dragon Family Wing Chun, a branch of the Leung Sheung line and more specifically from my sifu, Bill Graves.

But what I’ve found is that in order to understand Wing Chun’s overall fighting strategy, a student has to be able to think in a different way. I mean they have to be able to start with the big picture and keep that in mind. Because Wing Chun is a conceptual art, understanding Wing Chun’s overall fighting strategy requires conceptual thinking rather than analytical or technique-based thinking.

If a student approaches Wing Chun from an analytical or technique-based mindset, Wing Chun won’t ever make sense to them. Concepts will constantly seem to contradict one another. The mind and body won’t be able to assimilate the concepts into a unified objective. That’s one of the reasons many students have such trouble applying Wing Chun. They can’t get their minds to think in a different way. When physically pressured, they are overwhelmed with trying to put everything together and because of that their concepts get thrown out altogether and just do whatever they can possibly comprehend doing at the moment. This usually means resorting to flailing, speeding up and trying to use brute force during sparring or chi sao.

So now to the original question… “is Wing Chun for defense or offense”?

Wing Chun is for BOTH defense AND for offense… and literally at the same time.

Wing Chun isn’t about doing one thing first and then something else next. Wing Chun is fully
capable in teaching its students to do it all at once.

But how? How can we as Wing Chun practitioners seek to strike first but also wait to
attack? This is where the sheer genius of the art comes in to play.

Wing Chun is for Self-Defense

Knowing that Wing Chun first and foremost is for self-defense helps you know that the art does not go seeking fights nor does it make you more aggressive. Instead, Wing Chun teaches students to “act upon a stimulus” and “respond simply” to an attack. Instead of making students more aggressive, Wing Chun seeks to teach deeper levels of “calm” and higher degrees of “focus”.

However, just because Wing Chun is for self-defense doesn’t mean that Wing Chun waits to see what technique someone is going to use in order to begin responding. Wing Chun is all about taking simple, direct action towards its goal. The next point will help you understand when Wing
Chun takes action.

In Wing Chun, distance is the threat and also the opportunity. If someone who is physically aggressive gets close to us, that’s when we become offensive and take action. Never do we allow an attacker to come within threat distance without taking offensive action towards them.

In Wing Chun, the Best Defense is a Good Offense

When there is no other choice but to defend ourselves, Wing Chun believes in immediately
attacking their attack. Within the exact moment when an attacker comes into
threat distance, that is the exact moment we become offensive. So instead of a
passive wait-and-see strategy, we implore an active, attack-based strategy.

Wing Chun Goes to The Centerline

Every movement a Wing Chun student makes, whether offensive or defensive, goes directly to the centerline of the attacker. Because the centerline is the origin of movement, Wing Chun aims here
in order to go to the source of their attack. Occupying their center also shuts down any future attack they may try to bring.

In Wing Chun, defensive actions are never “blocks” as you would find in other martial arts such as Tae Kwon Do, Karate or boxing. Instead, Wing Chun’s defenses are all deflections on their way forward. Defense is achieved through body position (geometry of the body) along with constant forward energy towards the opponent’s center.

Hopefully, this article helps shed light on Wing Chun’s overall fighting strategy and how it all fits together to become functional. There is of course more to it all. But remember to really try to open your mind to thinking differently and in a more conceptual way. At the very least I believe you can now see a little more of the big picture when it comes to the conceptual art of Wing Chun. And hopefully that makes your journey into Wing Chun a little less challenging.