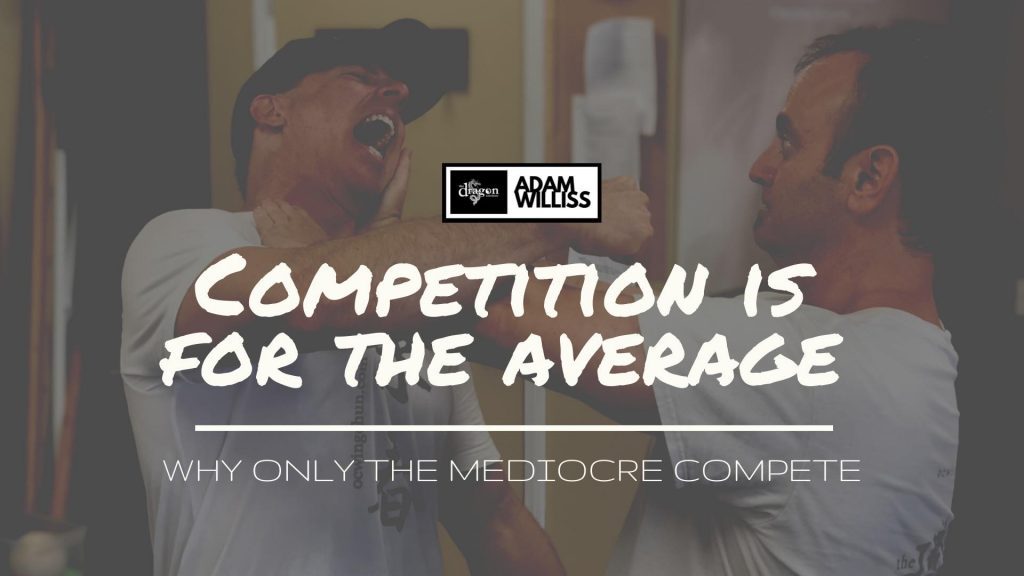 They say competition is healthy. I say it’s for the average. You know, those who can’t see past the struggle.

Competition is defined as the struggle between organisms for the same resources – food, water, shelter, light, money or territory. In martial arts, its the act of contesting against one another. Synonyms include to battle, clash, collide, contend, contest, fight, grapple, oppose, play, rival, try or wrestle.

Now, let’s contrast that with the purpose of Wing Chun. The art, as I see it, is an internal martial art designed for self-defense. To me, its ENTIRE premise is to learn how NOT to struggle.

“Do not fight with the strength, absorb it, and it flows, use it” – Ip Man

As a self-defense system, Wing Chun’s goal is to either “get the hell out of there” and if you can’t do that, than to “get the hell in there.” This means that the primary goal it to get as far away as possible from potential danger. When that’s not possible, we must immediately and completely dominate the threat.

Although many confuse this, nothing about Wing Chun’s goal is even slightly remote to that of competition-based sports. In fact, competition, by its very nature of contesting someone else, is in direct opposition to the purpose of self-defense.

Competing means spending your time looking at everyone one else. It means constantly looking over your shoulder at your competition. It basically means doing the same things that everyone else is doing and just trying to get a little ahead of the next guy.

To dominate, on the other hand, means a single-minded focus beyond what others are doing.  To dominate means to race against yourself and consistently push past your “limits”.

And since successful Wing Chun practitioners develop a very specific mindset, in order to remain true to its focus, participating in competition will ultimately do more harm than good. The mind cannot focus upon both competing and dominating. These are opposing thoughts that the mind can’t hold at the same time.

This, to me, is what it means to be successful in Wing Chun. Having this clarity of purpose means everything. Of course it is extremely easy to get distracted by the flashiness of competition. But that’s what the mediocre do. They get distracted by flashy things. Those who learn to dominate stay obsessively focused upon their goal.

“The successful warrior is the average man with laser-like focus.” -Bruce Lee

Now, I realize some people choose Wing Chun because they don’t want to hit and get hit. If you’re one of these people, you’re even worse off than those who compete. If you’re a sifu who doesn’t teach hitting and getting hit, you may as well be teaching dance. Don’t try to use this article as reason to sit on the sidelines and not put in hard work. This article is about honesty. This means being honest with ourselves, our art and staying true to its purpose.

But at the same time, don’t overcompensate for what practitioners may be lacking by selling out to participate in competition. The only thing a good Wing Chun practitioner needs is honesty with himself and his training partners.

Why try to be like everybody else? Wing Chun doesn’t compete, struggle, play or participate in physical debates. Wing Chun dominates – from the beginning to the end.

But how do you break through the struggle? I mean, how do you learn to dominate?

Here are five ways you can choose domination over competition.

Don’t Be Bound By Rules

Whether these rules are imposed through competition, through tradition or even through other people’s opinions, rules keep you in the struggle.

When you place rules upon your training, you train in order to win based upon such rules. This shifts your attention from doing whatever it takes to defend yourself, to finding a way to win within the limitations of rules. At the end of the day, there are no rules when it comes to true dominance. Rules are for chumps.

Don’t Be Afraid to Think Different

Do What Others Refuse To Do

Dedicate yourself to being the best at what you do. Commit to excellence. When others are lazy, you do that extra set on the jong. When others are too busy to train, you make time because it’s more of a priority for you than it is for others. Always go that extra mile.

Position is power. Resistance isn’t power. Struggling isn’t power. Ownership is domination. Never give anyone space to operate. Space is yours. Their center is yours, eat up their space. Give them no quarter.

This is how you eliminate yourself from having to compete with others. Everyone is trying to be better than each other. But it’s not about being better. It’s about being different. Thinking different. Moving different and acting different. Look at what everyone else is doing. Be aware of it. Understand it. But don’t let it distract you from blazing your own specific path. You don’t dominate by doing the same things other people do. You dominate by being pinpoint focused on your own path and refusing to be distracted by their path.