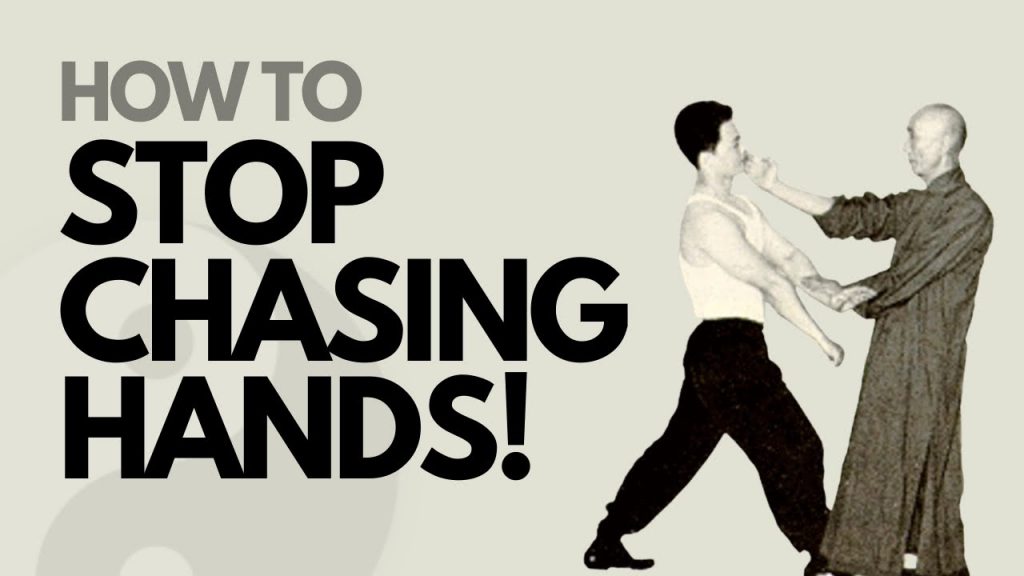 In this Wing Chun lesson, I’m going to talk about how to stop chasing hands.

Know this… chasing hands in Wing Chun is something that EVERYBODY goes through. In fact, all Wing Chun students have to work on chasing hands less and really chasing the center more.

So what does is the specific definition of chasing hands in Wing Chun? It’s basically when you are focusing on the obstacle of the opponent’s hands more than your goal. It means you are very defensive-minded trying to prevent them from hitting you. You’re worried. You’re fearful of them hitting you.

When really, the goal of Wing Chun is to occupy the centerline. The saying is “chase the man not the hands.” However, this is much easier said than done.

Because we do need to simultaneously defend and attack, but… in Wing Chun our defenses are really about structure and geometry. We use these to defend as we move towards our attack.

Instead, Wing Chun structure and positioning is our defense, not blocks and swipes and holds and things which you might see in other martial arts. Because of this, we have to learn how to not chase hands.

So that’s why in this Wing chun Lesson post, I’m going to help you to learn how to stop chasing hands of your opponent and start dominating in both sparring and in chi sao.

The reason people chase hands in Wing Chun is because they’re fearful of being hit by the other person. They’re scared of their opponent’s hands. So chasing hands is for defensive reasons. They’re trying to protect themselves and have a defensive base mindset.

However, Wing Chun, in and of itself, has an extremely offensive mindset. In other words, Wing Chun’s answers to dealing with an attack are very offensive. Now, of course there are defenses involved but usually this is accomplished with simultaneous attacks and defenses. So everything is about developing this offensive mindset and responses. When people are chasing hands, it signifies that they don’t trust in position and structure. In other words, the geometry of Wing Chun’s trianglular positions and deflections to handle the defense for them.

So then, how do you stop chasing hands? You have to change the way you think. That’s the bottom line. You cannot approach it in the same way that you’ve been constantly approaching your sparring or your chi sao. You can’t do that because that’s what’s causing you to chase hands to begin with. Instead, you have to change your mind about it.

Now this doesn’t come overnight. You have to meditate on it and you really have to start focusing on the goal. As you fight in Wing Chun, what is the goal? To occupy the center.

How to Stop Chasing Hands in Wing Chun