Jack Dempsey, one of the greatest and most popular boxers of all time, reveals the techniques behind his unparalleled success in the ring. Straightforward and with detailed illustrations, Championship Fighting instructs the reader in the theory, training, and application of powerful punching, aggressive defense, proper stance, feinting, and footwork. The boxing methods Dempsey reveals will prove useful to both amateurs and professionals or anyone interested in teaching themselves how to box or practice martial arts. 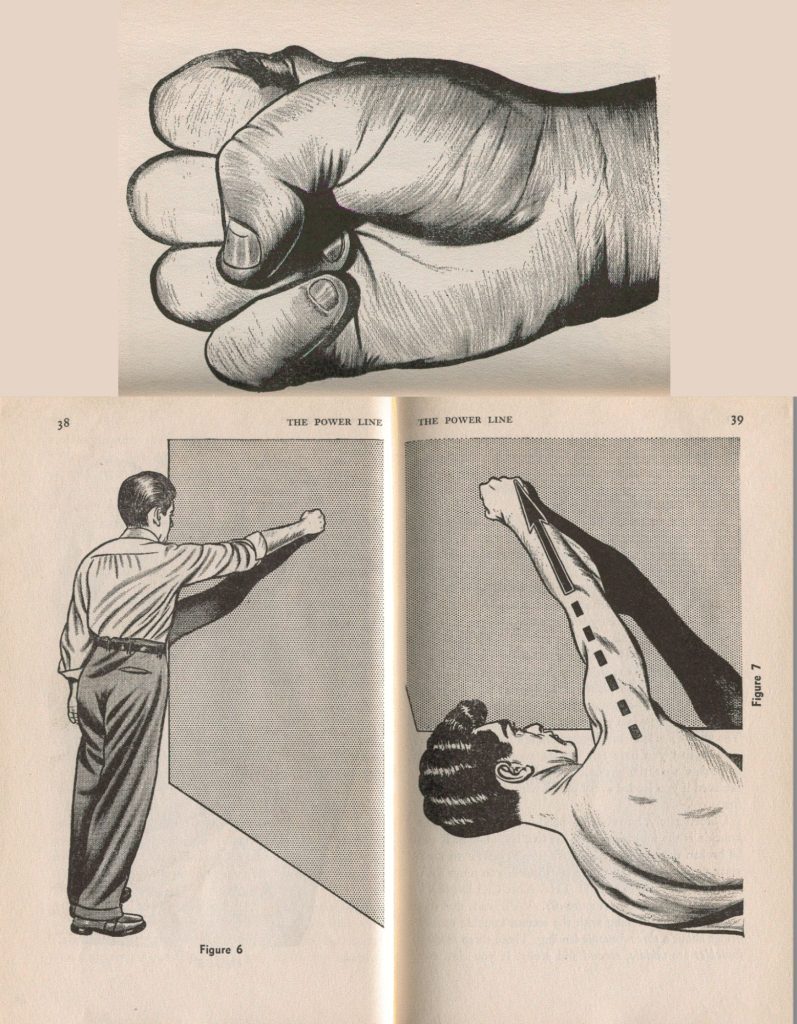 At least nine of every ten fellows who try to box never become good punchers because they never learn how to make their arms and fists serve efficiently as conveyors and exploders. They become “powder-puff” punchers or, at best, only fair hitters. Their punches lack body-weight, explosion and follow-through. Such failure can be prevented by powerline punching.

THE POWER LINE RUNS FROM EITHER SHOULDER-STRAIGHT DOWN THE LENGTH OF THE ARM TO THE FIST KNUCKLE OF THE LITTLE FINGER, when the fist is doubled. Remember: The power line ends in the fist knuckle of the little finger on either hand. Gaze upon your “pinky” with new respect. You might call that pinky knuckle the exit of your power line – the muzzle of your cannon.

…the greatest possible solidity would be achieved if you landed every punch with the little knuckle first. Unfortunately, however, the hand-bone behind the little knuckle is the most fragile of the five backbones. It can be broken the most easily. You must not attempt to land first with the little knuckle. Instead you must try to land first with the knuckle next to your pinky (the ring finger). We’ll call that the 2nd knuckle. Aiming with the 2nd knuckle usually brings about a three-knuckle landing. Those three-knuckles are: middle, second (ring) and pinky. If you aim with the second knuckle, those three knuckles usually will land together because the average fist slopes slightly from the middle knuckle to the pinky. Such a three-knuckle landing not only prevents the hand-bone behind any one knuckle from bearing all the punch-shock, but it also permits punching almost exactly along the power line. Rarely will one of those knuckles make a solo landing. But if you aim with the little knuckle, you risk a dangerous solo landing on forehead or blocking elbow.

Always aim with the second knuckle – the one next to your pinky – and LET THE OTHER KNUCKLES TAKE CARE OF THEMSELVES. They’ll take care of themselves all right; for the shape of the fist makes it impossible for them to do otherwise.

The knuckle of your index finger (the one next to the thumb) is fairly prominent, but not as prominent as the knuckle of your middle finger. In some face-punches and in most body-blows, that index knuckle will land with the other three, for a four-knuckle landing. That’s okay, let the index knuckle come along for the ride. Under no circumstances, however, try to land first with that index knuckle. If you do, you’ll not only break your power line, but you may also break your wrist.

Beware likewise of trying to land first with the prominent middle knuckle-the source of most hand injuries. Such aiming will slant your hand off the power line and, at the same time, endanger the middle knuckle and its hand-bone. When that middle knuckle makes a solo landing, its prominence prevents the other knuckles from helping to absorb some of the punch-shock. That shock or pressure is terrific in any full-fledged punch, particularly when you nail an opponent with a head blow just as he is stepping into you. In that split-second, your fist must withstand the shock-pressure of an explosive collision between two hurtling body-weights.