First of all, thank you for your dedication to Wing Chun! Knowing that you’ve practiced Wing Chun for over 60 years, you are a personal hero of mine! To be able to interview you and bring your amazing insight to others through this article is an unbelievable honor for me! –Adam Williss

Question: What makes you love Wing Chun so much?

Simplicity is the key to brilliance. I enjoy simple things in life. In my own practice and teaching of Wing Chun, I make things as simple as possible to the point it cannot be simpler. I also believe that the world not only needs coaches that lead successful people to greater success, but also coaches that can help unfortunate people see hope once again in life. Wing Chun is one of such vehicles to put a smile on people’s face.

Q: Something many don’t know is that you began Wing Chun under Yip Man in Hong Kong. What was that like?

A: I started training with Grandmaster Yip Man in the 1950s at his 200 sq ft apartment at Lei Cheng Uk Estate – a government subsidized public housing project for low income families. Yip Man was having health and financial issues and was at a low point in his life after his wife passed away. Violence was frequent in public areas and its dark hallways were occupied with triads, drug dealers and pickpockets. Many of the stories of Yip Man taking care of himself and his neighbors came from here. As a matter of fact, during the entire time I was studying Wing Chun in Hong Kong, I had to lie to my mother that I was staying after school for tutoring. I’d get out of school around 3pm, walk 30 minutes and train there until dinner time. Sihing Ng Chan and Chow Tze Chuen were leading classes then. Yip Man corrected our forms and showed us a few moves from time to time. Most of the students were either from the Kowloon Motor Bus Company or from my high school, St Francis Xavier College. Because we were school kids and considered a bit well-off, the adult classmates did not always take it easy on us during sparring.

Q: What initially drew you to Wing Chun?

A: My family owned an apartment building in Hong Kong’s Kowloon Sham Shui Po district where my mom let me host parties and dance practices on our patio on the weekends. Bruce Lee, Hawkins Cheung and I would invite people from our school. Wong Shun Leung and William Cheung occasionally show up and demonstrated Wing Chun. After a while, I just followed everyone into Wing Chun.

Q: Another fact many are interested in is your friendship with Bruce Lee. Can you tell us about experiences you guys had together?

A: Bruce Lee was quite popular in Hong Kong at the time, making movies and running all over the places, so other than those weekend cha-cha dance gatherings I couldn’t catch him very often. However, when we both landed in San Francisco in 1959, there was a period of 6 months in which we practiced chi sao together a lot. I learned a great deal of his tricks.

Q: In 1968, approximately 10 years after you began Wing Chun under Yip Man, you changed your approach when you met Kenneth Chung. Will you tell us what was so unique about his hands? 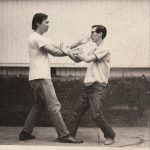 A: Despite starting my Wing Chun training under Yip Man, I do not promote myself under the grandmaster, due to my belief that only his senior disciples, such as Leung Sheung, Lok Yiu, who truly earned their status could and should. Sifu Kenneth Chung (Ken), despite being 7 years younger than me and barely 20 years old when we first met, opened my eyes to Wing Chun.  Prior to meeting Ken, I had little problem even sparring with some of Yip Man’s students in Hong Kong. I even had my own school in San Francisco on Chinatown’s Bush Street. But after meeting Ken in 1968, I immediately converted to the Leung Sheung lineage. It was his depth of knowledge, his precise execution, the effectiveness of Leung Sheung Wing Chun principles and the details of its training methodology that impressed me so much. In kung fu, there is a saying: Seniority is not based on start date, but accomplishment.

Q: Having trained under the Leung Sheung lineage for the last 50 years, what defining characteristics does Leung Sheung Wing Chun have when compared to others?

A: Through Sifu Ken, I was introduced to the late Sifu Leung Sheung in 1976.  I respect the man a lot. Sifu Leung Sheung was a very honest and sincere teacher and shared a lot of his insights with me. He never wanted his students to blindly drill on fixed routines. Instead, he would personally feed attacks to his students to understand themselves in relationship to the opponent’s movement and energy. Most importantly, Leung Sheung was big into core structure and functional energy development. He believed that the core Wing Chun principles should never be compromised, but the set up and execution of the techniques depended on each individual and environment.

Q: Having trained with Kenneth Chung, since 1968, can you help people to try to understand what makes your relationship seem to work so well?

A: Sifu Kenneth Chung did not only teach me Wing Chun, he helped me explore myself and discover the cause of my own insecurity. He is not just a good sifu, but also a good friend. Besides showing me Leung Sheung’s interpretation of Wing Chun in depth, he helped me custom-build a learning path that fits my size and attributes.  In fact, the first advice Ken gave me was: Follow me but don’t copy me.

Q: What are your thoughts on the current caliber of Wing Chun teachings?

A: First of all, I must give credit to a lot of westerners who have become very accomplished instructors, and in many areas do an even better job than their Asian counterparts.  Looking into the course of Wing Chun development, I think the mountain to climb after technical proficiency will be the mountain of mental insight, i.e. Is the teacher passing on the right analytical skills to his students to look beyond merely the physical techniques? It should not be daily increase but daily decrease in the variety of ways to handle a situation. There should also be less wastage of energy to achieve results. Finally, after the concerns of practicality and simplicity are addressed, the teacher needs to present a sustainable path with meaningful purpose, i.e. The Tao to the students, so they can become an Artist of Life. For my purpose, I want people to better themselves and have a smile on the face.

Q: Do you consider yourself a preservationist or progressivist? Do you believe in practicing strictly the way that Yip Man or do you believe that Wing Chun should be ever evolving?

A: I am a preservationist on the core principles, yet a progressivist on applications.  Over the course of a student’s journey I immerse them with an increasing amount of details on the original form and conditioning exercises.  The core structure can only be experienced by rigidly adhering to the classical forms, as passed down from our ancestors. The outcome of that is functional energy, which is formless. There are many tests to determine whether a student has acquired the skill and functional energy. Students should evolve on their own applications. Acquire the form, but seek the formless. Learn the original way and find your own way.

As an extra bonus, here is a recent podcast featuring Sifu Ben Der